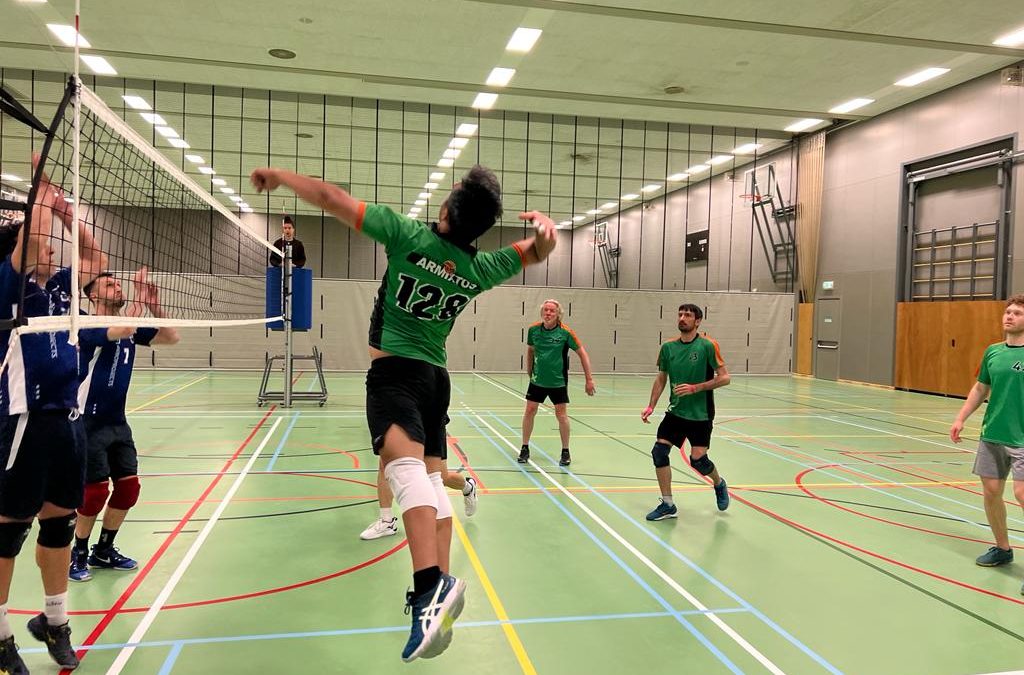 Via e-mail we received a wonderful report from our Gents of Heren 4. Sit back, read and relax! Or, scroll through to the bottom line and find out what they wish for…

Eventhough this was a season in which a lot of matches had to be postponed or even cancelled, it was foremost the season in which we could play matches again after the long corona-preventing limitations. Saturday the 21st of May marked the end of this competition season, on which date mostly postponed matches were played. Only 1 Armixtos team still played: H4 still had to face US H6 at the Amstelcampus. Dutch version

On arrival there we found only 1 field set up: on center court! Well, if you get to play on a field that usually sees a top division team perform, one expects boards for substitutes, ball rollers and a second referee…but those were probably rightly unrealistic expectations. There was only one player of the US Top Division team present – but their libero was luckily there in support of Armixtos 🙂

So we set out to win also this last match for Armixtos. The main focus in the beginning of the match was: “it’s the white lines!!” We also found the roof significantly lower than usual… but lucky for us, this proved also to be difficult for the home team 🙂 We managed to start with clearly more spirit than US H6 and within minutes we were ahead by 8-1. Later on the men from US improved their game and started scoring points as well, but it never got very exciting: we won the first set by 25-15.

In the second set we continued as the first had ended: we all managed to score points, but so did US. Especially the good blocking of our mids Fabien and Jelte made the difference: we won by 25-22.

In the third set it certainly became more stressfull and for a while US was ahead of us by up to 4 points. But through the encouragements of Marscha and the last bits of energy of Henk put inot good sets and smart tacticals we managed to also win this one: 25-23!

Henk was done and already put his training jacket on before anyone had said anything. So Jorn got to set the fourth set. Surprisingly, this mostly confused the opponent and before they knew it we were ahead by 7-0! After a dip in the middle of the set, where US found renewed energy – and volume – that brought them again dangerously close, we finally managed to over-shout them – and mostly over-class them. At 24-21 it fell to David to hit the last spike of the season home!

Would you like to join this fun team next year? That’s possible! This season we will still train on Monday May 30 19:00h and on Tuesday the 31st of May at 21:00h. Feel free to drop by! Or leave your contact details with us or specifically the secretary. After the summer stop – in which we still play in the park and at the beach fields – we will resume trainings again by the end of August in Sporthal De Pijp.